The film “42” brings to life the story of Jackie Robinson and his journey to become the first African American baseball player breaking the “color line” out in theaters this past Friday.

However, “42” goes beyond baseball to the epicenter of American character in valuing justice, perseverance and freedom shown through Robinson.

Robinson is a hero emerging from a time where history was primed for a stable recognition of humanity.  His heroic status is a double win for sports in athleticism and prejudice as a sociopolitical symbol nodding to both the past and inevitable future. 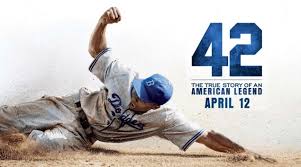 A quote that remains suspended in my memory is from Harrison Ford as Branch Rickey.  “Like our savior you have to have the guts to not fight back.”

Robinson’s humble yet fighting spirit bursts through the grins injecting humor into tense moments.  His shuffling movement before stealing a base showcases an animal like trickster glint of mischief.  The tender moments with his wife highlights gentleness.  It is this likability that allows the ferociousness of emotion that bellows out of Robinson after an encounter with Ben Chapman to have such an impact on the audience.

The scene with Robinson responding to the stinging taunts in the tunnel is beautifully shot and something to look out for.

It is here that I think Robinson in the movie’s script fulfills the label of hero in recognizing his potential to show courage by not retaliating in violence and owning his character.  He refuses to be victim to circumstance and chooses true freedom.  This hero in the film is not absence of emotion and shows real frustration that does not deny the hurricane of feelings unleashed in a private arena.

Finding the light amongst the dark or the other way around can be a trick for an actor to have in their back pocket.  Like a two sided coin flipping the focus of intensity allows moments of one experience to shine against the backdrop of the contrasting feeling or situation.   The dichotomy offers the audience a hidden richness.  The layering of thoughts makes that one look from pitcher to batter a silent conversation worth watching.

The heroes and villains that are chosen by people can be a reflection of the core beliefs, worldviews, and prejudices.  Heroes give people something to root for, believe in, and use as role models expressing the inner soul’s needs and emotions on a scale that is healthy and relevant.  An American hero can emerge from those that are rooted in history, truth, and real existence and those that come out of entertainment.

This movie “42” is a blend of real existence and entertainment with a hero to root for.  See the legend of Jackie Robinson in theaters now.

News of the praiseworthy movie is traveling fast.  Check out stories put out by Entertainment Weekly and The New Yorker.

“Courage doesn’t always roar. Sometimes courage is the quiet voice at the end of the day saying, “I will try again tomorrow.”-Mary Anne Radmacher